I have decided to start a new photography series: “Learn from the Masters”. I would like to introduce you to some of the most iconic photographers, who have shaped modern photojournalism, street photography and photo documentary. I believe that nothing will help you to improve as photographers as learning from the masters of this art and taking them as a reference point.

Every article will describe the life and achievements of each photographer and will be concluded by the lessons that we can learn from each master.

Scianna was born in Bagheria, Italy in 1943.

In the ’60s Scianna enrolled at the University of Palermo in a course of literature, philosophy and art history. However, he never completed his studies. It was during this period that the master took up photography.

By chance, he met a person who changed his life and shaped his careers at a photographic exhibition in a local photography club. This person was Leonardo Sciascia, one of the most influential writers of Southern Italy. After several years of collaboration with Sciascia, Scianna published Feste religiose in Sicilia, a photo-book to document many of the Sicilian religious celebrations.

Sciascia moved to Milan in 1967, where he works as photo reporter for a magazine in Italy and Paris. In 1973 he became a journalist at the same institution. During this period, Scianna kept heading back to Sicily as often as he could to keep documenting the lives of his fellow Sicilians. This in-depth study of his land and culture lead to the publication of two bodies of work: Les Sicilians in France and La villa dei mostri in Italy.

Scianna also worked as a journalist in France for a local magazine. Most importantly, he met Cartier-Bresson during this experience abroad. Thanks to this encounter, Scianna joined Magnum Photos in 1982, becoming a full member in 1989.

Meanwhile, Scianna kept bonding with exponents of the literature all around Europe.

In the 80’s, Scianna entered the world of fashion photography, working with elite brands, such as Dolce & Gabbana. At the end of the decade he also published a retrospective, Le Forme del Caos.

Scianna moved back to his beloved religious photo documentaries in the ’90s. Indeed he publishes Viaggio a Lourdes, which focused on the journey to Lourdes from a religious perspective.

One of the latest works of Scianna shows a desire to go back to his roots and reconnect with the places, which shaped his youth. In 2002 Scianna completed Quelli di Bagheria, a book on his home town in Sicily.

Too often we see photographs that manipulate reality. That are more of a proof of the imagination and creativity of the artist, rather than a tangible proof of the human situation before the photographer’s lens.

On the matter Scianna gave a very powerful and exhaustive comment, saying:

Cezanne could paint his apples by heart, a photographer cannot. If there is no apple, there is no photograph. The photograph happens in the exact moment, when the shutter is pressed. It is a fraction of a second. This is very novel in the image world. Every image before the advent of photography are made. When photography comes, photographs are taken instead. At this point, what you see within the frame has a great importance. In a Cezanne’s painting what matters is not the apple, the technique Cezanne used is what matters. On the other hand, in photography the apple has a determinant importance. Otherwise we would not have the photographs of our girlfriend and pets in our pockets.

Photography is a proof, a proof of the reality. The modern culture tends to underestimate this factor. Photography is seen as a symbol rather than a representation of reality. This moves photography closer to painting. Firstly, this reasoning makes the invention of photography useless and incomprehensible. Painting has been existing for thousands of years, while photography for slight more than one and a half century, but photography is dying already. It is not dying in terms of practitioners yet it expanded enormously. Its cultural meaning is vanishing. Its objective used to be bridging the viewer and the reality. This used to be extremely important. Such peculiarity of photography is underestimated. Consequentially, images are more important than what they represent and instead of being a bridge between the viewer and the world, now photographs are a wall. They prevent us from seing the reality.

Therefore, we should remember to be consistent in representing the reality to build a relationship of trust with our viewers and to honour the photographic medium. 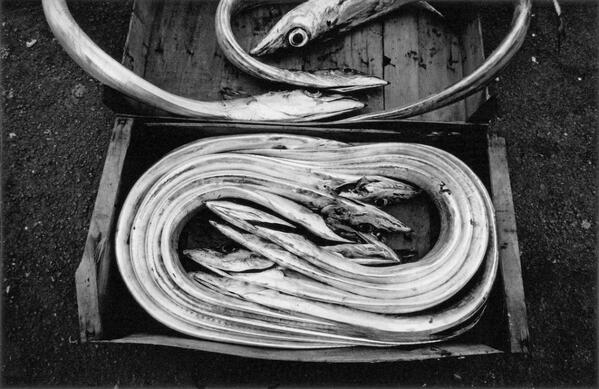 Recognising our talent is quite e difficult process. I believe that every one of us was born with a talent, which might or might not be related to photography. I have met people, who are incredible talented cooks, other who are incredibly talented businessmen or even parents. Every talent is marvellous and every talent should be respected.

However, I have also met several people, who despite being incredibly talented did not leverage on it. This is probably the worst waste I can think of.

Finding your talent will take time and effort. It will require you to fail and to investigate on your own nature, passions, needs and skills. Scianna centred an entire interview on this topic, which I found incredibly interesting and insightful.

Below your can read an extract to that discussion:

You either have or not have a specific talent. It is exactly the same as being born tall or with blue eyes. It is not your merit or your demerit. What really matters is what you do of your talent. For example, if you find a Stradivari, this does not make you an exceptional violinist. You have to learn how to play that violin first. Talent follows the same process.

There are small and big talents. When you find it, it is often  thanks to someone else. You find your talent as someone else recognises it. You might even think to be talented in something, while it is not true. On the other hand, when you do something and others appreciate it you find your predisposition. From that point onwards, what one does with his own talent is his responsibility only.

Everything you do is made of three factors. Firstly, there is talent. Secondly, there is luck. Finally, there is hard work, tenacity, obsession, commitment. […] The greatest luck is the of finding or being recognised a talent early in your life. However, that luck is not enough. You must use this present and transform it into something big during the time you have available.

So, we should learn to perceive the signals other give us to understand what our talent is. However, recognising it is not enough. Talent is nothing without commitment, passion and discipline. Therefore, is up to us to cultivate our talent and make it grow bigger and stronger day after day.

If you read the previous article on Bruce Gilden, you might have noticed that he likes shifting and manipulating the barriers of ethics. On the other hand, another pillar of modern  photography and photo-documentary, such as Scianna, approaches this important point under a different perspective.

In a brief interview to a local television, Scianna said the following:

When photographing we can break the ethics. However, we must not do it. There are no tangible limits. I wish no limits and imposed laws existed. However, the limits set by ones’ integrity are there and should not be overcome.

Some photographs have to be taken because certain facts must be shown and narrated. On the other hand, some other photographs can be the start to generate morbidness and addiction. These photographs should not be taken.

This reflection on ethics is very fulfilling and I will not comment on it in order not to corrupt it. I will leave it to you and your own interpretation.

Ferdinando Scianna is a great photographer, indeed. He was able to export his visual style, characterised by the influences he received in his mother land: Sicily, all around the world.

I think that his approach to the medium is really influenced by his studies in philosophy, especially. Moreover, his photography is influenced by the charismatic personalities he met in the world of literature while travelling arounf Europe during his career. By looking at his interviews and reading his articles, one can perceive the quietness and calm of his approach to life and photgrpahy.

This master can teach us several lessons, especially on the more intangible and qualitative aspects of photography.

Firstly, we should never forget to honour photography. This medium was born to document reality and share our vision of it with the viewer, not to manipulate and contaminate it.

Then, we should find our talent as soon as possible. This will leave us plenty of time to cultivate it and make it grow. We should never let our talent die. Even the greatest talent can do nothing in life, if he does not commit and work hard enough to succeed.

Finally, we should always be ethical. Some photographs have to be taken, others should not be. It is up to us, our sensibility and consciousness to set the adequate boundaries.

‘Learn from the Masters’ series:

7 thoughts on “Learn from the Masters: Ferdinando Scianna”